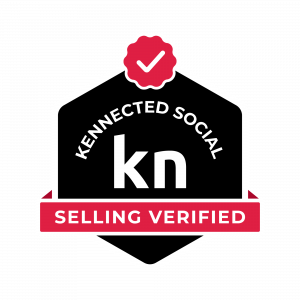 Apply To Get Verified With Our Social Selling Course & Certification!

What is Social Selling?

Social selling is a technique for lead generation that involves directly interacting with prospects on social media. It allows you to zero in on business prospects that are spending time on Facebook, Twitter, Instagram, LinkedIn, and other social platforms. Spoiler alert: almost everyone is using these social networks.

Social selling lets you laser-target your prospecting and build relationships with countless prospects. It’s all about making use of your existing connections. Done right, you can start relying on social selling rather than use cold calling.

So why social media? Social channels are where people love to hang out online. It’s where they can connect with people they know and stay in touch with them no matter how far away they are from each other. And the popularity of sites like Facebook, Instagram, and LinkedIn are undeniable. They each have millions, if not billions, of active users.

If you’re still not using social selling for your sales funnel, it’s safe to say you’re missing out on a fantastic source of leads. You’re probably getting left behind by the competition—especially the social media savvy ones.

Submit Your Company To Become Social Selling Verified with Kennected! 👇

*Based on standard 1-year pricing and an average of 5 meetings booked each week using Kennected.

Ready To See How We Can Supercharge Your Sales Funnel?

*Based on standard 1-year pricing and an average of 5 meetings booked each week using Kennected.