LinkedIn To Restrict ‘Violent Or False’ Content—Including From Trump 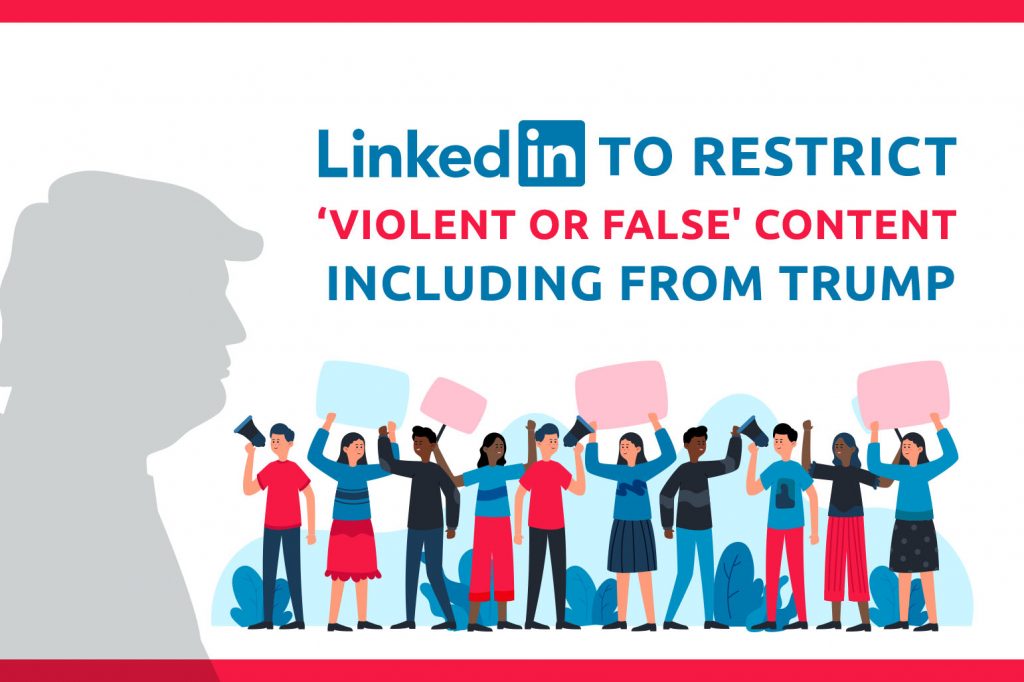 LinkedIn will restrict all content that is considered violent or false—including posts from President Donald Trump. This is according to leaked audio files of LinkedIn general counsel Blake Lawit, wherein he addressed how the platform would handle content from the president and other elected officials in cases where it contains misinformation or spurs violence.

The general counsel revealed the policy during an online forum on racism. Lawit said LinkedIn will restrict Trump if he uses the platform to incite violence or spread misinformation. After the audio files were leaked, LinkedIn confirmed its authenticity.

During the event, one employee asked what would happen if Trump attempted to use its platform “in the way that he’s been leveraging Twitter and Facebook”. The employee likely referred to the president’s posts on both social networks where he used the statement “when the looting starts, the shooting starts,” regarding protests after the death of George Floyd in Minneapolis, following the use of excessive force by the police during an arrest.

LinkedIn said that no elected officials had violated its rules to date, and that content on its platform tends to be more professional compared to those found on other social networks.

“We have rules around harmful content, hate speech, misinformation, incitement to violence, and we don’t have different rules for politicians and members,” said Lawit. “So, if a leader, for instance, were to make a statement on our platform that violated our rules about inciting violence, then we would take action. We would restrict the speech.”

LinkedIn head of communications Nicole Leverich confirmed this in an email, saying, “We have clear policies and apply them consistently for everyone.”

Trump, however, is nowhere near as active on LinkedIn as other social platforms. The Donald J. Trump for President Inc. page supporting his re-election campaign has just over 20,000 followers, whereas he has 81.8 million followers on his Twitter account and over 29.8 million on his Facebook page. Trump’s LinkedIn page had also not been updated in around three months. Additionally, Trump does not have a personal LinkedIn account, aside from the page dedicated to his campaign.

LinkedIn said that if the president did use the platform to post content, they would not allow him to incite violence. Violent and false content were among the topics discussed during LinkedIn’s diversity roundtable video conference meeting for all employees.

The meeting was billed as a chance for LinkedIn’s 9,000 employees to “reflect on our own biases, practicing allyship, and intentionally driving equitable actions”. The forum allowed for anonymous chat messages, which a number of employees seized as an opportunity to post racially insensitive comments that were dismissive of the Black Lives Matter movement.

“As a non-minority, all this talk makes me feel like I am supposed to feel guilty of my skin color,” said one LinkedIn employee. “I feel like I should let someone less qualified fill my position. Is that ok? It appears that I am a prisoner of my birth.”

This was one of the anonymous messages that criticized not only the Black Lives Matter movement, but also LinkedIn’s own efforts towards diversity in the workplace.

LinkedIn CEO Ryan Roslansky later slammed his employees’ ‘appalling’ comments on race. He said that granting anonymity on the question form allowed some staff to “add offensive comments without accountability”.

Roslansky added: “We require members on our platform to have real identities and we will not allow anonymous questions in all hands meetings in the future. I said it in the Company Group yesterday, and I will say it again, we are not and will not be a company or platform where racism or hateful speech is allowed.”