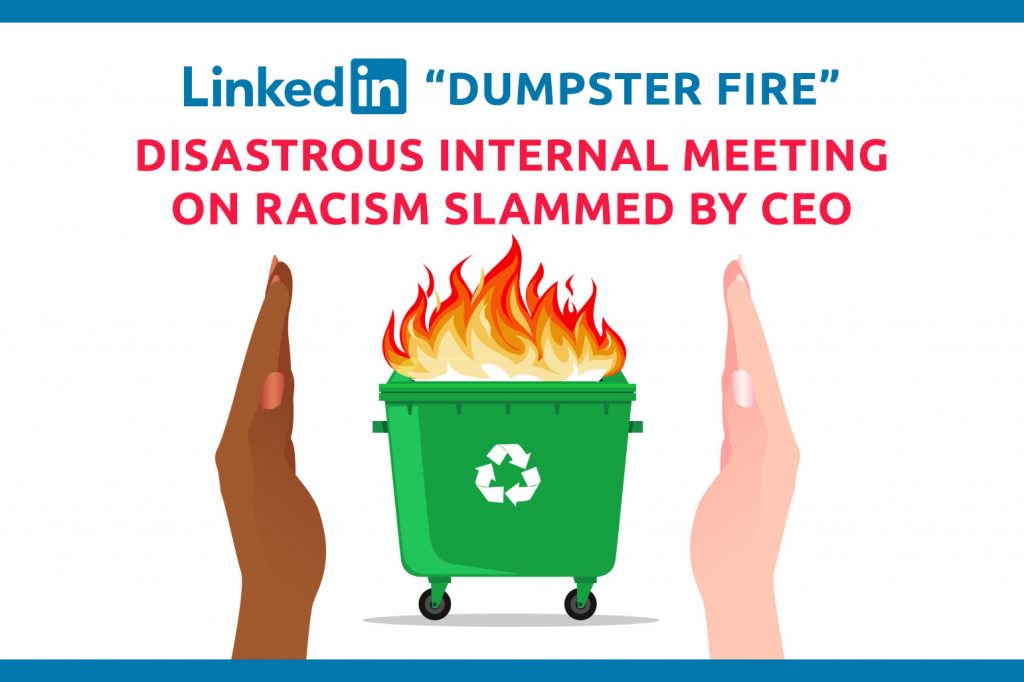 The meeting, which some participants described as a “dumpster fire,” was a virtual global town hall that was meant to address the nationwide social unrest sparked by the Minneapolis police killing of George Floyd. The event was billed as a platform to discuss racial inequality by “reflecting on our own biases, practicing allyship, and intentionally driving equitable actions.”

The meeting was conducted by video chat and featured a sidebar where employees could leave comments. This is where several commenters criticized LinkedIn’s position on diversity hiring, equating the practice with racism against white people.

One LinkedIn staff said: “As a non-minority, all this talk makes me feel like I am supposed to feel guilty of my skin color. I feel like I should let someone less qualified fill my position. Is that ok? It appears that I am a prisoner of my birth. This is not what Martin Luther King Jr. would have wanted for anyone.”

Another comment read: “I believe giving any racial group privilege over others in a zero-sum game would not get any support by others. Any thoughts on hurting others while giving privileges with the rosy name called diversity?”

“George’s killers need to be tried according to law. But how can hiring more minorities into manager roles and C-suite positions address cop racism? I thought to hire at LinkedIn is based on merit alone.”

During the conference, other employees chimed in to condemn the comments, calling them racist and upsetting, with some LinkedIn staff even saying they “do not feel safe working at this company in a place where I was already uncomfortable with the treatment I’ve received on my OWN team since I started”.

“The racism at LinkedIn really came out in the Q&A section!” said one anonymous LinkedIn staff.

CEO Ryan Roslansky called the comments “appalling” and “offensive” after The Daily Beast reached out for comment. He said that granting anonymity on the question form allowed some staff to “add offensive comments without accountability”.

Roslansky added: “We require members on our platform to have real identities and we will not allow anonymous questions in all-hands meetings in the future. I said it in the Company Group yesterday, and I will say it again, we are not and will not be a company or platform where racism or hateful speech is allowed.”

“By raising voices, democratizing access to learning and jobs, and tackling the systems of economic injustice, we can and will make meaningful change. For any of this to happen, we have to start with our culture and commit to working through hard things together,” Roslansky said. “We have to anchor on our values, including having open, honest, and constructive conversations and respecting that relationships matter.”

The LinkedIn CEO further said that the anonymous comments from within the company itself “reinforced the very hard work we still have to do”. Roslansky reassured his staff that LinkedIn is committed to stamping out racism. He also noted that LinkedIn recently launched free online courses on diversity, inclusion, and unconscious bias.

“Many of you shared the hardest part was realizing that this company we love and hold to such a high standard still has a lot of work to do to educate ourselves and our colleagues on how to create a culture that is truly anti-racist,” Roslansky wrote in a LinkedIn post. “We will do that work.”