How Does Coca-Cola Use Mass Marketing? 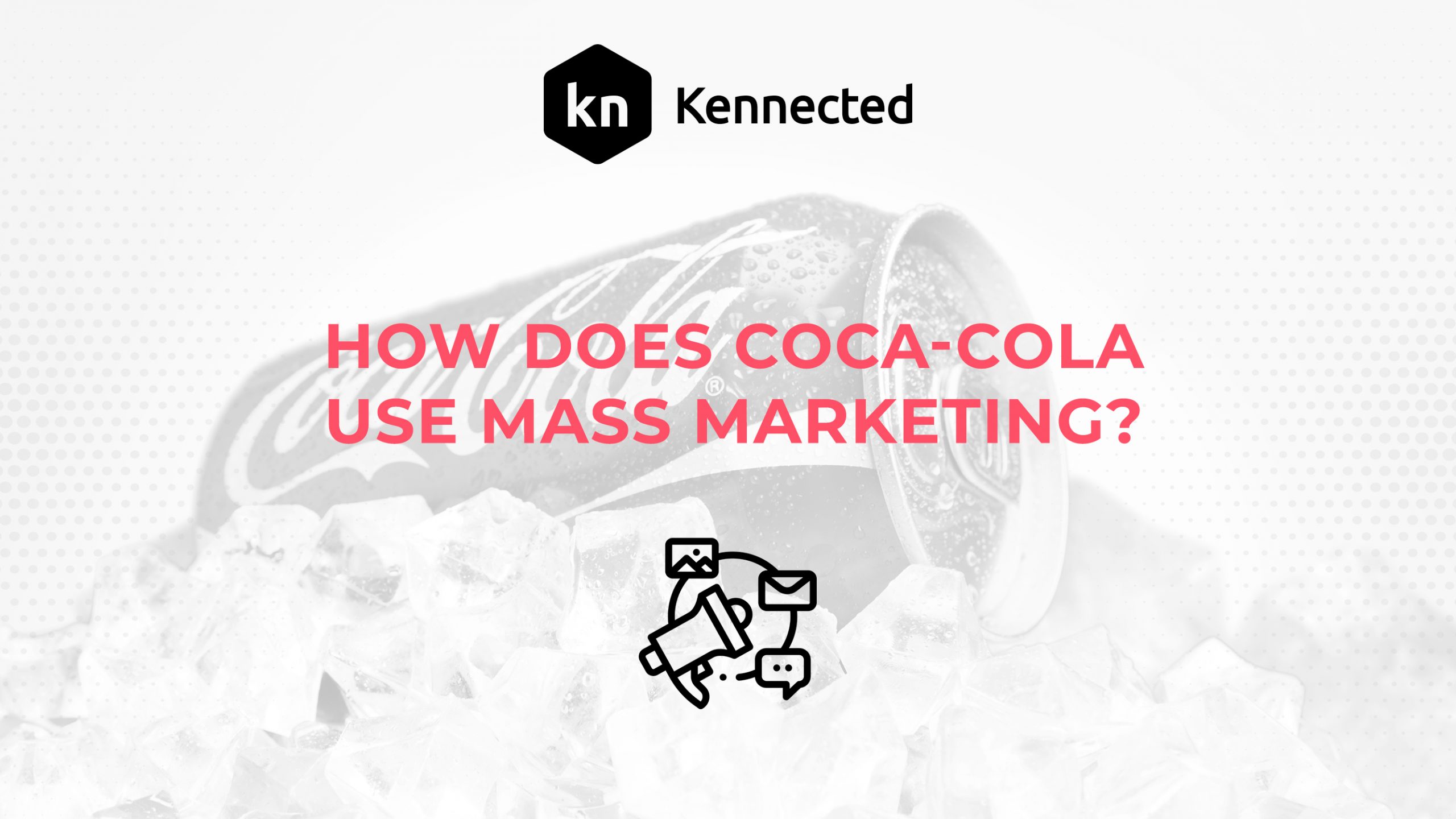 Coca-Cola’s marketing strategy is to satisfy their longterm customers and create new customers.

In this context, the financial control of Coca-Cola is creating more sales and increasing the profit margin.

My name is Ryan-Forrest, and I’m the vice president of marketing here at Kennected.

Most organizations utilize the mass media to persuade and reach a wide audience with different needs but will buy the same product.

This paper seeks to analyze the concept of mass marketing of Coca-Cola and the strategy we find most useful with Kennected.

What Is Mass Marketing?

Mass marketing is a marketing strategy where corporations seize the opportunity to appeal to a wide market of potential customers.

The organization decides to ignore niche marketing and market segments and attempts to appeal to the entire market with one strategy or one offer.

The strategy involved in this type of marketing strategy focuses on a higher volume of sales at lower prices to obtain maximum exposure for the product.

A business organization will develop products with great mass appeal and offer them to every customer through mass retailers and independent stores.

There are two different ways to define that. One way is to define it in terms of the volume of people using your product.

For instance, Coca-Cola is most certainly a mass-market product in terms of volume, despite being a high niche product (it’s a peculiar taste, soft fizzle drink, and non-alcoholic beverages).

The other way to define the mass market is to look at how it is targeted.

Additionally, they should use the web, posters, banners, and text ads to hit the targeted population.

As a strategy, Coca-Cola’s mass marketing will ensure that the product message is passed to everyone willing to listen.

What Is Financial Control?

Financial control is the maintenance of a proper balance between receipts and expenditures.

A continuous flow of adequate funds is required to carry forward the marketing function. Businesses can attain profit through the ultimate turnover and adequate investments.

A History On Mass Marketing

It began in the 1920s when businesses sent advertising messages to an undifferentiated audience via radio broadcasts.

However, other media — such as television, magazines, and newspaper — soon emerged.

Television remained the most popular means of reaching a mass market until the 21st century.

Thanks to the Internet, we now have mass marketing media such as email and social media. However, it also ushered in a new age — the era of target marketing.

What Companies Use Mass Marketing?

Telecom operators use mass marketing campaigns because a huge number of people are using telecommunication services.

Body deodorants and many personal hygiene products use this marketing strategy as a big market segment uses them.

How The Coca-Cola Company Launched

Pharmacist and businessman Asa Candler bought the formula for Coca-Cola from inventor John Pemberton for $2,300.

Candler distributed Coca-Cola from Atlanta, Georgia, across the United States.

Sure, it wasn’t highly original, but it marked the start of one of the most popular brands in the world. For almost 70 years, Coca-Cola was sold for five cents a bottle.

By the late 1890s, Coca-Cola was one of America’s most popular fountain drinks, mainly due to Candler’s aggressive product marketing.

Advertising was an important factor in John Pemberton and Asa Candler’s success, and by the turn of the century, the drink was sold across the United States and Canada.

Today, the Coca-Cola Company products are consumed at more than one billion drinks per day.

Coca-Cola’s products are the most successful in the world today.

As depicted by statistics, its fame is priceless, which shows that Coca-Cola’s products have a market value of over $100 billion.

The company was the most valuable publicly traded in the United States.

They are not following segmentation in marketing; their strategy is to market the product to a mass market.

Coca-Cola’s marketing strategy is a single drink produced for the whole market.

Since Coca-Cola is a product that spans various niches in terms of popularity, its mass marketing campaign has proved to be very effective and successful over time.

Coca-cola has a wide range of products, including soft drinks. These products are offered globally, and the marketing mix can study their product strategy.

Coca-Cola target every customer in the market, but its main focus is age, family size, income. The perfect segmentation is the reason behind the success of Coca-Cola.

Age is one of the critical factors, and Coca-Cola took advantage of it.

Over the years, the company has run various advertisements with its iconic polar bears, for example, and those memorable ads are meant to appeal to everyone, not a particular group of Coke drinkers.

These songs were popular among the population.

Every year Coca-Cola influenced the modern image of Santa clause in Christmas commercials and created a strong bonding among customers.

Coca-Cola also contracts with big restaurant chains to increase their product market. Coca-Cola was presented with the Highest Brand Equity Award in 2011.

Coca-Cola has a strong global marketing strategy with many pillars crucial to the brand’s success.

The brand’s unique positioning is its biggest strength — and, of course, its network of bottling partners doesn’t hurt.

Coca-Cola is considered a cash cow because it has a single competitor in Pepsi and has a fantastic presence worldwide.

Its high brand equity works in its favor, too, further strengthening the company’s marketing position.

Marketing products to the masses are common in sectors like consumer durable good, FMCG, and some types of services.

Regarding pricing, what helped Coca-Cola stand out was its five-cent appeal in the early days.

The pricing strategy changed once more competitors were brought onboard and challenged the public’s perception of affordable drinks and quality.

As other brands began to raise their prices while maintaining their reputation, Coca-Cola had to follow suit.

Although Coca-Cola has done a lot of marketing, it still needs to embrace the shotgun marketing approach.

This approach involves several ways in which a product should reach a large consumer population. This includes cable, radio, and television marketing.

As a result, the production process could incur a lower cost, leading to a more considerable profit margin.

This shotgun marketing approach is useful for promoting a new product, but it can also help attain brand preference.

Consumers were searching for low-calorie brands. By then, the company was struggling due to inflation, which led to inefficiencies. As such, it needed a big idea to come out.

Diet Coke was identified as the priority brand.

By the end of the century, it had already attained a brand name and a national distribution power, growing 3x faster than other colas.

The owners of the company have made a standard product by continuous advertisement in which they persuade consumers to use the brand with no sugar.

Diet Coke is a soft drink, a favorite among people who are conscious of their heath.

To achieve its goal, it launched a coordinated sales force and advertisement drive that was well executed, making Coca-Cola a strong brand in the business.

Notably, mass marketing is the best for Diet Coke if it has to remain a great brand and stay ahead of competition from other sugar-free soft drinks.

Another one of the Coca-Cola products you might be familiar with was their Coke Light drink, a form of diet cola.

Like Coke Zero, Coca-Cola Light is sugar and calorie-free. Additives give the taste a “lighter” feel but do not differ nutritionally compared to Coke Zero.

These carbonated drinks cause obesity, and it is a significant problem nowadays, and Coca-Cola is one of the largest companies of carbonated beverages.

In developed countries, the market share of the company may decline because people prefer healthy drinks over carbonated drinks.

Non-alcoholic beverages in the U.S. are controlled by the FDA, the Food and Drug Administration.

This means the government has control over the production procedure of these products.

The PEST-Analysis deals with political, economic, social, and technological factors that influence a company’s strategy in the environment in which it operates and identifies its changes.

It analyzes the environment in which the company operates its system.

The advancement in technology and the utilization of technology tremendously increase the sales of Coca-Cola.

For example, companies use glass bottles, then plastic bottles and cans are utilized, it becomes easy for people to bin them easily.

The advancement of communication channels, television, and the internet significantly influence communication technologies and marketing strategies.

SWOT analysis is the company’s framework, and it is the abbreviation of strength, weakness, threats, and opportunities.

The internal factors are strengths and weaknesses, and the external ones are threads and opportunities.

We define market segmentation so that consumers share the same set of needs and demands, and as a leading industry, you should need to know the requirements and your target market and how you fulfill and satisfy their needs and wants.

Various international coffee chains such as Costa Coffee, Starbucks, and Café Coffee Day are gaining popularity, and these chains cause good completion in the market.

They are not a significant threat to Coca-Cola.

What's The Difference Between A Mass Market Product And A Niche Product?

A mass-market product is when a corporation, usually a monopolist, sells a product to a relatively large fraction of consumers.

To explain a mass market, it can be paralleled with the niche market.

A niche product targets only a specific section of a larger market.

What's The Difference Between Mass Marketing And Target Marketing?

Mass marketing aims to reach an extensive range of audiences; it isn’t cost-effective.

That’s because advertisers often must take time devising a one-size-fits-all message to reach an entire market. But target marketing doesn’t have such an issue. As a result, it’s cheaper.

While target marketing is cheaper, it takes time to see results. That’s because it requires a lot of research to identify a potential audience.

On the flip side, mass marketing produces faster results. Since it addresses a larger audience, it makes sense that you would generate a few leads.

When the company treats the overall population market as one large market, it will create a large pool of potential customers willing to buy the product.

As a result, the large market potential will yield a tremendous sales volume of the target brand.

Thus, the product will reduce costs, and the customers will enjoy low prices.

Moreover, there will be few variations on the production, resulting in a longer and more efficient product run.

Nevertheless, the transport and warehousing costs will be reduced, as the production system will be geared towards distributing one major product.

Another major advantage of advertising and selling to the mass market is the scope as well as the cost-efficiency of operating on a larger scale.

All advertising messages that are spread through mass media such as broadcasting and print media has the potential to reach millions of viewers in a single show.

Despite having many advantages, mass marketing also holds some weaknesses for businesses. Undifferentiated marketing strategy allows putting all eggs in one basket.

This makes them inherently vulnerable to the changes in the marketing environment.

Alongside this, customers cannot develop loyalty to brands that are spread through mass marketing.

This leads to margins as the cost needs to be maintained at a lower level to prevent customers from switching brands.

Another disadvantage may be that companies that aim to satisfy everyone in the market with a single product can be easily challenged by competitors that focus on serving a smaller market segment.