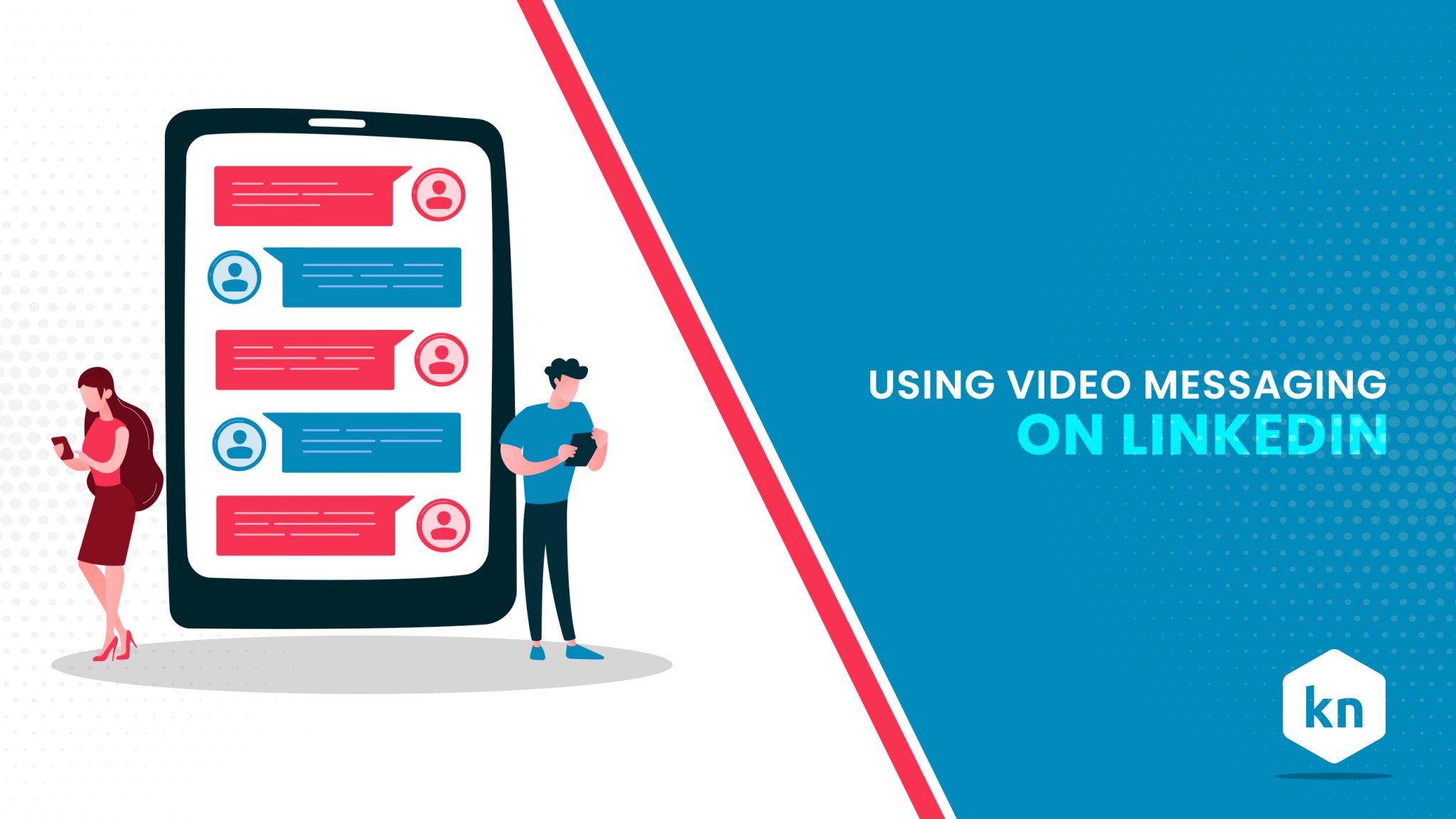 Messaging prospects on LinkedIn was always the most reliable sales growth hack. But now there’s one strategy that surpasses it—and you should probably pay attention to this emerging trend.

All of your competitors are using LinkedIn messages to attract the attention of their target audience. So if you want to stand out, you need to adopt this new strategy: using video messaging on LinkedIn.

Here we’re going to discuss why you should consider using videos for your LinkedIn outreach. We already know that videos are powerful tools for marketing. They’re not just a tool in your arsenal anymore. Videos have transformed into an essential marketing strategy.

Videos help you engage with your target audience because they are eye-catching, informative, and interesting. But typically, videos are used for content. What we’re talking about here is using videos for your online outreach.

So instead of messaging with the usual text, you’re going to send a video. So how does that work and why should you try it? Let’s take a closer look.

Why Video Converts Better than Text-Based Messages on LinkedIn​

The sheer novelty of sending a video message instead of text on LinkedIn is enough to catch your target audience’s attention. Not a lot of marketers and entrepreneurs are using this strategy at the moment. Maybe it will catch on eventually, but for now you have the advantage.

One of the biggest challenges for marketers is that it’s hard to distinguish yourself from others, especially from your competition. If they’re also calling or emailing leads with the same pitch, it’s hard to get people to pay attention to your outreach.

That’s why you need to use videos.

It’s not the message itself that will catch their attention—but the format of your message. The medium is unusual, and so it will make your message stand out even if you’re saying the same thing that your competitors are saying.

Videos are not just eye-catching. They are direct, personal, and easy to digest. Your recipients don’t have to spend their time reading a block of text. They can just listen to what you’re saying and get the message. Videos can target ‘non-readers’—or people who just don’t want to read every single thing in their LinkedIn inbox.

In this fast-paced world, sometimes people don’t have the time to read messages from strangers. Giving them the option to just listen will give you a better shot at connecting with them. If you’re sending long emails made up of walls of text, forget about it. Best case scenario is that they’ll look at the headline, read a few sentences, and then delete the whole thing.

Your target audience isn’t always going to dissect your messages to see if you can actually help them. You need to do all the heavy lifting for them or else they’ll move on. Video messages make it easier for recipients to get the gist of what you’re trying to say and why you are contacting them in the first place.

Video sales messages can increase your engagement, allowing you to build more connections and develop more relationships that lead to conversions.

You don’t have to let go of text emails or standard phone calls. That can still be a regular part of your LinkedIn outreach. But don’t restrict yourself to those channels either. A personalized video message is creative, unique, and far more likely to get a response. This can be the ultimate sales growth hack—the best tool in your arsenal.

Videos are hard to ignore. They are engaging and eye-catching. Humans are visual by nature. We are hard-wired to respond to other people’s movement, including their voices and body language. People want to see other human beings. Videos provide that form of contact, whereas text emails don’t have the same human feel to them.

So even from a biological perspective, videos can help your marketing efforts.

Videos are the perfect storytelling medium. Watching a video is like having a conversation—albeit a one-sided conversation. With a video message, you can convince your audience to engage and believe in what you’re saying because it’s coming directly from you, rather than an email full of dry text.

Don’t get it wrong, text emails can still work wonders for you—but compared to video messages, one is just a lot more engaging.

Finally, one of the biggest benefits of using video messaging on LinkedIn is that it personalizes your relationship. When you send a video message to someone on LinkedIn, there is no doubt that the message is personalized.

It’s not a brand video or a vlog that you’re sending. You’re sending a message that was specifically recorded for them. This extra effort to communicate and connect will be appreciated by a lot of people. When they can feel that you’re engaging with them on a human level and not just as a marketer, you are creating a solid foundation for a great business relationship.

It’s the same principle behind personalizing your LinkedIn outreach messages using Kennected. People love reading personalized messages. Video messages take that concept and bring it to a whole other level.

Video messages help you establish a personal connection that’s just impossible to create with text. It puts a face to the name behind the computer. The next best thing is actually meeting up with your leads and having a conversation.

Use video messages to establish rapport and get a genuine conversation going.

We’ve established that video is a powerful tool in an entrepreneur’s arsenal. Now let’s talk about how you can use video messages to build better relationships—faster.

First, you need a script. Yes, video messages need to be authentic and personalized, but they also need structure. You don’t have to write everything you’re going to say on a piece of paper. Your lead will not appreciate seeing you reading off of a script. So what you’re creating is actually an outline or a skeleton of the topics you need to cover in your video message.

Don’t wing it. You may come off as unprepared, and therefore unprofessional. Even if you have what it takes to improvise, take the time to prepare a script. Just having one will help you deliver a message that’s authentic yet organized.

A script will also eliminate all the “uhms” and the “ahs” that are normally seen in unscripted videos. If you have scripts and templates for your emails and phone calls, why not have one for your video messages?

If you’re using video messages to connect with leads for the first time, you may go for one of these video types: team introductions, product demonstrations, and client testimonials. No matter what you create, keep it brief and simple. You want your video to pique your target’s interest. It doesn’t have to be the entire conversation—the goal is to get them interested enough to talk more about your products and services at a later time.

Give them the details they need, but don’t take up too much of their time. Whatever you’re planning to talk about, make sure you rehearse it a few times. Have someone record you so they can tell if you’re sounding awkward or unnatural.

Next step is to decide which parts of your video you need to customize. Let’s face it, creating a custom video message for every single one of your leads on LinkedIn is a time-consuming venture. It may even sound unrealistic. Trust us, it’s worth it. But you don’t need to start from scratch every single time.

Your videos don’t need to be 100 percent unique to each viewer. You can keep all the standard stuff about your products and services and then add a short, personalized greeting for whoever you’re sending it to. Or if you don’t want to mention any names, you can send similar messages to different people as long as you know that the content would interest them.

Some business owners even reserve their highly personalized video messages for their most valuable prospects. That’s a good way to save time and develop a solid relationship with people who are already engaged with your brand. So if you’re reaching out to LinkedIn leads for the very first time, there’s no need to personalize every single aspect of your video—yet. Once they become loyal to your brand, taking a personalized approach will work even better.

Effective video messaging is all about answering questions before prospects have the chance to ask them. Give them the information they need so that they can get value from your video message. This will justify their clicking on your video and paying attention.

Another important tip that you should keep in mind is that the quality of your video matters too. Even if it’s not the typical video that you’re posting on social media, the video quality is still important. Prepare your camera and shoot in a well-lit environment—preferably by a window if you don’t have studio lights. Natural lighting is perfect for these videos.

Make sure the surroundings are nice and quiet so that they won’t get distracted by any background noise. Dress professionally and don’t forget to smile. Your prospects will respond more if they feel like you are approachable.

Set a specific goal for the number of video messages you want to send per week, and try to stick with it. Analyze your progress to see if people are actually responding to your video messages. If they’re not replying, tweak your script, your video quality, etc.

Stand Out From the Crowd with Video Messages on LinkedIn​

Did you know that email open rates are doubled or even tripled when the word “video” is included in the subject line? The proof is in the numbers. You may see an increase in your open-to-reply rate once you start sending personal sales videos.

Try it out for yourself and see how video messages can take your business to the next level. Build a better connection with your leads, develop stronger relationships, and increase your sales with the help of video messages.